GOMBAK 17 March 2019: Living in this age of Islamophobia, institutions like IIUM is an easy doorway for terrorist groups to recruit their new members considering the diversity of its population as their target crowd.

As the university is committed to guarantee the security of students and for them to be freed from any act of violence and involvement with extremist groups or militants, the Office of International Affairs in collaboration with Student Representative Council (SRC), initiated the programme on “Terrorism Awareness and Prevention”

The programme held last week was conducted to create awareness on the danger and threat of terrorism, and to avoid students from attracting themselves to the perpetrators.

“IIUM is important because it is a university which produces leaders. However, the world is watching us. We want students to graduate safely and become leaders. If you get caught or arrested along the journey, effort to build the ummah will deteriorate. We want to ensure your security in this university,” Deputy Rector, Prof. Dr. Nor Faridah said in her welcoming remarks.

Country-based societies sat together to join the talk as their understanding of the security issue was considered vital to educate their members.

Understandably, the commonplace reported crimes involving students are in activities such as misuse of student visa, gang robbery, drug trafficking, and illegal demonstrations, which involve both male and female students.

Despite the uproar, the cases of individuals or groups of foreign students in militant and terrorism related activities exploiting the name of Islam, is small. But the impact is serious and could be detrimental.

Answering a question as to why foreign students are their primary target, Ayob Khan explained, “The fact that they have no police record, not monitored by police or intelligence agency, students are free to spread the ideology and can move everywhere which make them apparent.”

“Any encounter of suspicious act, unpleasant character of students, lecturers or staff, must be reported and channelled to the authority. The identification of the individual who reported the case will be protected under the law, and we will not leak the person’s information. We will monitor the suspect and investigate thoroughly,” convinced Ayob Khan.

Ayob Khan further explained: “Most relevant approaches used to attract new members are through online terrorist recruiting using online media, and dark web on internet. They will act usual and deliberately propagate and spread their materials and bring you closer to facilitate their movement.”

“Implications for being involved with terrorism are that they will face such heavy detention. For example, upon conviction, if they are arrested under SOSMA and POCA, 7-30 years’ imprisonment, name blacklisted within the country, INTERPOL and freezing or forfeiting of assets.”

He added, “We will not tolerate any act of terrorism as we must carry the thought of Islam as a peaceful religion.” *** 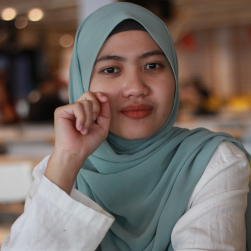 Nurul Suhaidi
Aspiring journalist and writer. Activist at heart. Loves peanut butter and will do just about anything for a treat or toy.