This article is a personal review of the 2018 film “Capernaum” directed by Lebanese director Nadine Labaki.

I believe this film can be categorised into a drama genre, one with a profound story to tell along with mesmerising performances by the cast members.

It’s important to note that viewer discretion is advised as it may contain elements that are too tragic for audiences since the director made the film setting as close to real life conditions as possible.

Having said that, the overall message and features of the film are still eye-opening and profound.

It takes you to this world of the underprivileged which makes you realise how fortunate you are for the conditions that you’re in. Suddenly, you realise that no matter how difficult things get, there’s always somebody out there who’s having it far worse and we’re actually living a luxurious life, comparatively speaking.

What’s interesting is that not only was the director able to capture the daily struggles of a poverty-stricken boy in the streets of Beirut in Lebanon, but she also managed to present them through brilliant storytelling that makes the audience feel for the protagonist and open their eyes to the reality of what’s going on in impoverished areas around the world.

The story is, to me, quite moving and heartbreaking and the exceptional performances of the child actors made it even more memorable, especially since some of the actors are actually real-life refugees.

The beginning scene was set in a courtroom in which the main character, a 12-year-old boy named Zain (played by Zain Al Rafeea) is suing his parents for the crime of child neglect. This obviously sounds absurd in normal circumstances, but I think the director did well in justifying the boy’s decision by immersing the audience in his tragic life.

Most of the scenes afterwards are events that lead up to that courtroom scene. In other words, the film is made in a flashback format. With that said, throughout the story, the audience are made certain of Zain’s survival at the end and that somehow, he ends up in a legal court battle where he’s a plaintiff and his parents, defendants. The question that remains is how and why.

Even though the film is not exactly based on a true story, the setting in which the main character is based upon, depicts the lives of many unfortunate children out there in underprivileged corners of the globe with desperate circumstances and unimaginable livelihoods.

There are many important takeaways from the movie but what I mainly got from this Oscar-nominated film is as follows.

I think it really helps to be visually reminded, as is the purpose of films like this, that children and adults alike from many places around the world are suffering through poverty and other related crises that are severer than whatever hardship that we go through in our lives. It’s best that we be grateful and not to take our blessings for granted, for there are ways many out there who would give anything for what we have.

On a more relatable note, each of us right now is going through something and some are having it harder than others. Personally, what I believe can really help in dealing with challenging times like this is to exercise patience in moments of hardship and gratitude in times of ease, both of which can be learned as we seek to put ourselves in the shoes of Zain, whether it’s Capernaum’s main character, or Zain Al Rafeea who is actually a Syrian refugee in real life.

Capernaum, the 2018 Lebanese drama directed by Nadine Labaki has won multiple awards including the Cannes Jury Prize and the Amanda Award for Best Foreign Film in Theatrical Release and has been nominated for many more.*** 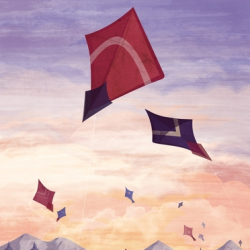